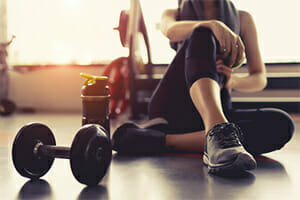 Mike Fohner, cross country running coach, tells this story about one of his students:

Last year, one of my young cross-country runners was fully content walking up the hills and avoiding physical exertion to the maximum extent possible. I tried all sorts of tactics and motivation techniques…to wits end. Even my “walkers club” (post practice sprints for those that walk during practice) had no effect. One meet, this runner unexpectedly knocked 3 minutes off her best time to which I gave a look of amazement to her parents. They smiled and said, “Well…she didn’t walk…so I guess we owe her ten bucks!!” So it appears that money is an effective motivator for all ages!

Brace yourself. According to Rod K. Dishman, Ph.D., director of the Behavioral Fitness Laboratory at the University of Georgia, nearly 50 percent of people who begin an exercise program drop out within the first 6 months. The question is, “Why?” What is it about sticking with a fitness routine that causes so many people abandon it?

The answer? Motivation. They don’t want health and fitness badly enough. It is a simple fact of human psychology that if we want something badly enough, we’ll do everything we can to get it.

Your challenge is to find out what motivates you to get serious about fitness and stick with it.

Mike Fohner’s student found that money was the motivation she needed to push her out of her comfort zone and into a commitment that she previously hadn’t been interested in.

Bryan Reece found a different motivation. Told by his doctors that he was minutes away from a heart attack, Bryan decided to fight back. Even though he had not been in a gym in 30 years, he turned his life around and eventually became a finisher in the Arizona Ironman competition. You can read his story in the book, You Are an Ironman: How Six Weekend Warriors Chased Their Dream of Finishing the World’s Toughest Triathlon by Jacques Steinberg.

Here are some possible motivators for you.

1. Do it for your health. Consistent exercise and healthy eating are the two very best things you can do for your health. You will develop a strong, healthy heart, reduce your chances of many cancers, prevent diabetes, keep a sharp mind and resist dementia and avoid many of the common ailments that come with aging. It is possible to age without decay, and the key to this is exercise and eating well.

2. Do it to look better. Appearance isn’t everything, but most of us care how we look. A strong and healthy person just looks good. And it isn’t all physical. Your demeanor will change as you develop the confidence that comes from the discipline of fitness. You will appear more energetic and confident because you will be more energetic and confident!

3. Do it to relieve stress. Really! It isn’t a cliché. Exercising really does cause physical changes in your brain and nervous system that results in feelings of calmness and well-being. In fact, you may get so hooked on the mental benefits of exercise that you will crave it!

4. Do it to be strong. If you have never done focused weight training, then you literally have no idea of the total transformation that you will feel after just a few weeks. There is nothing like bending over to pick something up that normally results in discomfort, strain and even pain, only to find out that it is a piece of cake! And by getting strong now, you reduce your risk of age-related falls and fractures because you have the core strength and balance to keep yourself stable.

It is worth taking the time to discover the powerful motivators in your life. Don’t worry about ‘bribing’ yourself: do what it takes to get yourself moving. Find out what makes sweating worth it. Find out what you want more than that brownie. Your health is at stake; in fact, your very life is at stake. It’s time to transform yourself.