You are What You Eat: You Can’t Out Exercise a Bad Diet 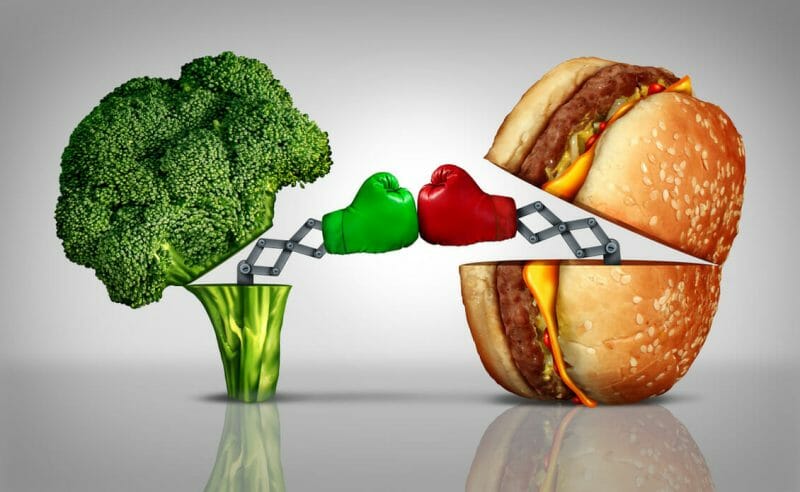 Ever heard someone give themselves permission to indulge their sweet tooth just because they just had a great workout? It’s a common excuse. Many people believe that because they exercise, they’re in the black as far as their calorie input/output. But in reality, this sort of thinking is a sure road to failure. Most people with a lean body and a 6 pack didn’t get that way by rationalizing their way to the desert buffet.

Many people have no idea how many calories they take in on an average day, often severely underestimating when asked to take a guess at it. But they also overestimate the number of calories they burn. The truth is, 30 minutes of the best boot camp in town will not cancel out that burger and fries!

Let’s look at the hard numbers. An average, moderately intensive workout will burn 300-400 calories in about an hour. That’s an hour of hard work with plenty of sweat and hard breathing.

Now say on the way home from the gym, you decide to grab a couple of donuts from Dunkin’ Donuts. After all, you’ve earned it! In the 3 minutes it will take you to put away two chocolate frosted cake donuts, you’ve consumed 720 calories. All your hard work is wasted, plus you’ve provided your body with several hundred extra calories to store as fat!

Or maybe you just want to have some pizza and soda with friends. You consider the 600 calories you burned running on the treadmill for an hour today (at 10 miles per hour—that’s a really fast run for a really long time!), so you eat 4 pieces of pizza and a coke. No problem, right?

Is it really worth it?

The bottom line is you simply can’t out train a bad diet. If you try to spar a bad diet with exercise, the exercise will lose every single time. The only way to lose weight and get that lean, sexy, healthy body that looks great in anything (or nothing) is to eat a healthy diet AND exercise.

Your weight loss is driven by diet and maintained by exercise. The only way to get ahead in the calorie game is to eat fewer calories than you burn. Only then will you begin to see the fat melt away. Exercise builds muscle and can rev up your metabolism, but you won’t lose weight if you continually eat more than you can metabolize.

This is not to say that exercise is not important. It is! In fact, according to Barry Braun, associate professor of kinesiology at the University of Massachusetts at Amherst,

When you look at the results in the National Weight Control Registry, you see over and over that exercise is one constant among people who’ve maintained their weight loss.

Want to keep the pounds off? Exercise! Exercise is crucial. And you must combine it with a balanced diet if you want to shed pounds.

If you try to spar a bad diet with exercise, the exercise will lose every single time.

Have you been trying to out exercise your diet? Don’t be discouraged; many of us have been guilty of this. It’s time to rethink your weight loss strategy. Try the following tips to start fresh and recreate your body!

You need both exercise and a healthy diet to be lean, strong and healthy. Don’t neglect either one!